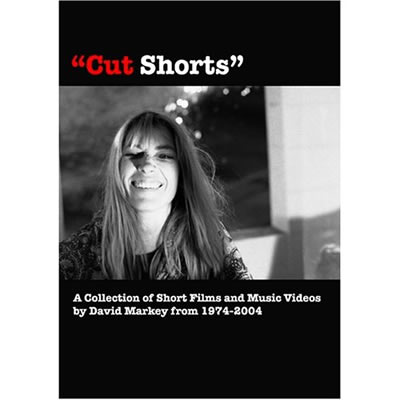 This collection represents a sampling of 30 years of work (and life) from Los Angeles native independent filmmaker David Markey. From his beginnings as a pre-teen experimental film auteur to his music videos for major labels, “Cut Shorts” displays Markey’s unique and askewed view. From friends turned actors, to apartment buildings and alleyways turned backlot, a utilitarian surreal quality quickly surfaces. Certain masks, wigs, and actors appear throughout. The early work plays not unlike the music videos Markey would direct decades later (often shooting and editing himself.) Some are “Instant Films” conceived and shot within the same day. Others are warm-ups for feature films (Desperate Teenage Lovedolls, Lovedolls Superstar, and 1991 The Year Punk Broke.)

Markey employs a frenetic Documentary-style approach mixed with punk fiction on the dime (literally). Economic constrains don’t deter Dave’s creativity, but provide an aesthetic that weaves these 20 disparate pieces together. Fueled by the energy and brilliance of LA bands X, The Germs, Black Flag, Red Cross, and countless others, Markey feverishly produced these backyard films much like the Do-It-Yourself attitude found in punk zines and bands and a twisted sense of humor often at the expense of American Pop Culture.

A Collection of Short Films and Music Videos by

This Is The Space Age

Summer Has Been Over For A Long Time