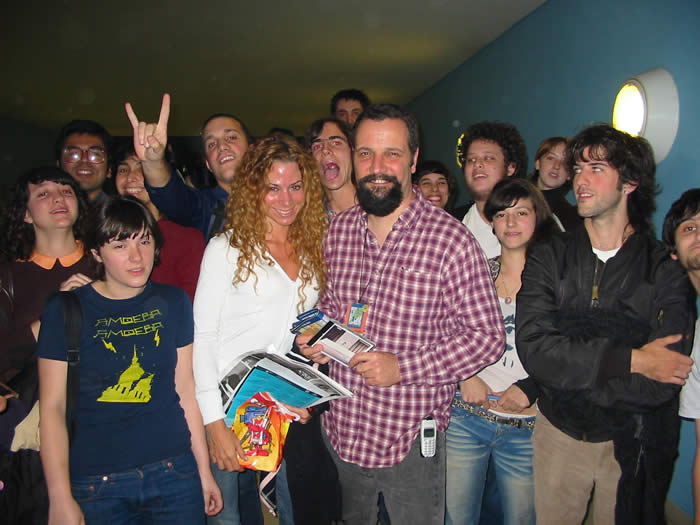 I just returned home from Buenos Aires, Argentina for the
7th annual Buenos Aires Indie Film Fest International
(BAFICI , for short, and web searches, apparently
there is alot of press online). People seem to party there into

waking hours). Needless to say, I had a blast!

I was invited there to screen five of my films, "The Slog

All the screenings went extremely well, and the crowd
reaction was enthusiastic and beyond anything I could
have anticipated. The total number of attendees at the
festival was just about 150,000. I quickly lost track of
how many times my films were screened. There was a

total of 400 films playing from such American filmmakers as

There was also a retrospective on the great Jean-Luc Godard,

a man I coincidentally share a birthday with (December 3). To

balance that out Ozzy Osbourne is also born on the same day.

"The Slog Movie" & "Desperate Teenage Lovedolls"
seemed to be the audience favorites (of my work) . As there's a
great interest in the Los Angeles underground music
scene of the early 1980's here, along with much
worshiping of The Ramones. Of course, the screenings

The Blues Scale" were packed, often with kids sitting in the

aisles. This would never be allowed in the United States.

stand and take it into the cinema. Another reality unheard of

back home in the States.

I was asked many times if I would beg Sonic Youth

to return to Buenos Aires. People seemed as interested

in Redd Kross as they were Kurt Cobain. I saw lots of

broken English, "This movie was your life 20+ years ago,

and now this movie is my life right now." She explained

she was just starting out in a punk band in Buenos Aires,

and she found the film to be inspirational.

I was kept busy by the 3 or 4 screenings a day/night
of my work, each followed by a Q & A with the
audience, which was primarily made up of young men &
women. Apparently there is a large amount of indie
films coming out of Argentina, and there are several
film schools, and budding filmmakers, many of which
were in the audience. The questions were often quite

interesting, and kept me on my feet. I had an interpreter, however

Apparently, from what I was told, the language translation

for the subtitles to my movies were pretty much right on.

I found myself reading them, as if to give myself a crash

course in Spanish. As it worked out, the little Spanish I knew

did me just right.

Fully Realized". I was worried all the obscure "inside"

1970's American pop-culture references would be lost on

Argentinean audiences. This proved to be not the case, as

I discovered all the trash TV I grew up with in the US, is

playing all day and night on cable down here. I mean, they

are still showing "Wonder Woman" for kristsakes! I was

To my surprise, my work seemed to be somewhat known,
even although there was never an Argentinian release
proper for any of them. Imports and "black market" is
how they've been seen for the most part. This festival will

certainly bring my work to a great number of Argentinians.

I was kept busy, but was able to get a little sight-seeing in

I went to the cemetery where Evita Peron is buried. Actually,

they do not put their people in the ground here. The graves are

gothic structures they are built in.

I was given alot of local bands CDs, notably Los Natas &

Coleco. Someone even gave me a copy of their documentary

film on the current underground scene in Buenos Aires called

"Todo Por Amor, Buenos Aires Dance".  I was touched that

my work is an inspiration to the kids there. I had a great time, 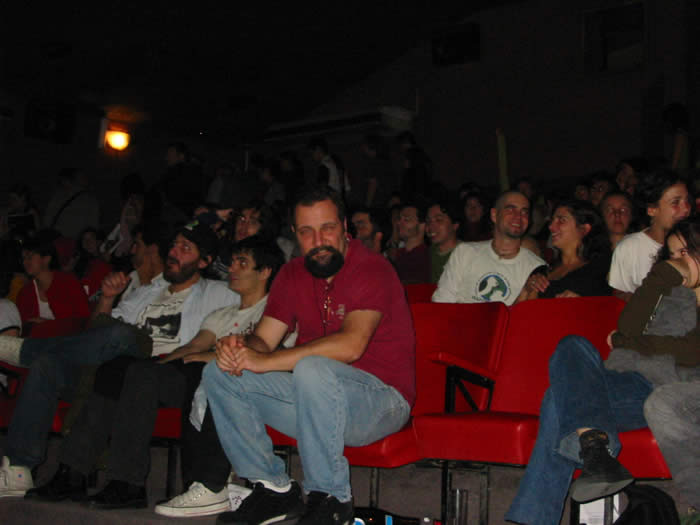